For most of us, an avalanche is something we never expect to be caught in. Savvy backcountry skiers, snowboarders and snowmobilers know to pack safety gear, read forecasts and recognize the signs. For those of us who ski inside the ropes, an avalanche is rare and not something we typically worry about, or even prepare for. But every so often, it happens. And after an avalanche, seconds count.

That is when having a dog on the team can make all the difference. “An avalanche path that would take 12 people three hours to clear can be cleared by a dog in about 30 minutes,” says Heather Thiry, a professional ski patroller at Tamarack Resort and firefighter/paramedic at McCall Fire. Thiry is one of several ski patrollers at Tamarack Resort who are avalanche dog (aka “avy dog”) handlers. Bergen, her five-year-old German Shepherd, is a certified avy dog who is also employed by Tamarack Resort and McCall Fire.

The presence of avalanche dogs in the McCall area has seen a recent resurgence. Tamarack Resort’s program has been in place essentially since the mountain opened in 2004, when a number of experienced avy dog patrollers from Colorado joined the team and brought their dogs with them. Currently, Bergen is the most senior dog on staff at Tamarack, joined by three puppies in training and two semi-retired avy dogs.

At Brundage Mountain Resort, the reintroduction of avy dogs to the patrol team is in its second year. Janna Allen is one of the women leading the charge in this arena. Allen was just named the Ski and Mountain Patrol Director at Brundage, an elite title for a woman in the ski industry – less than 15 percent of Patrol Directors in the U.S. and Canada are women. She is also in the process of training her 1-year-old Golden Doodle, Linus P. Doodle, to be a certified avy dog. Brundage also has another puppy in training who will work with the Cat Skiing program.

To say we are inspired by these hard-working dogs and their dedicated handlers is an understatement. To get a behind-the-scenes look at what life is like as an avy dog team, we sat down with both women to learn about the program. 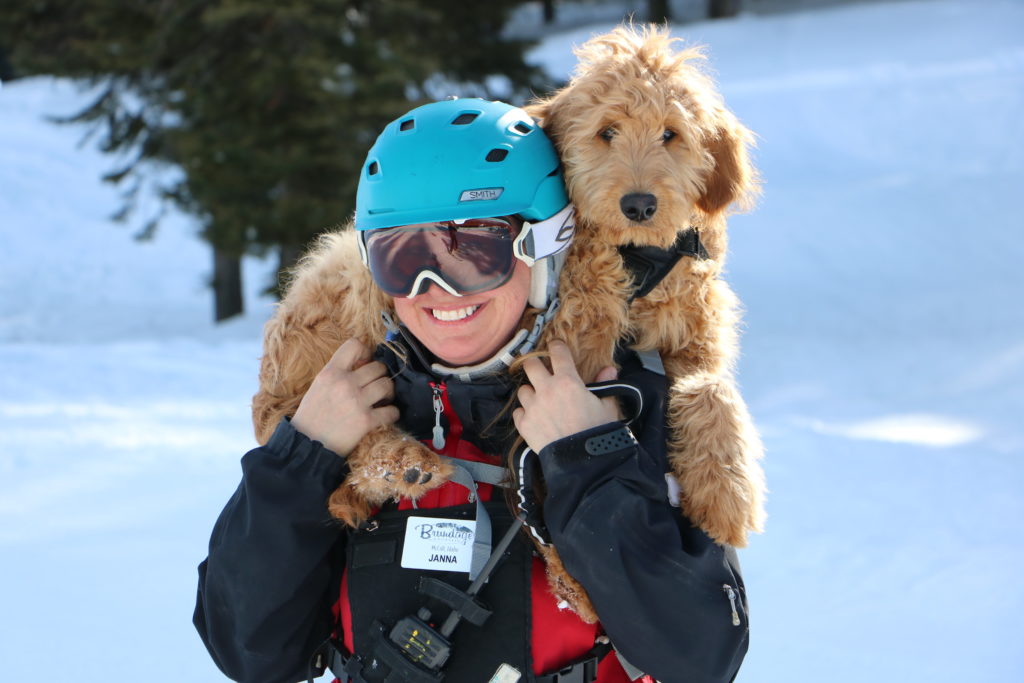 #1 Can any dog be an avalanche dog?

Yes and no. “There was a time when most avy dogs where only purebreds,” says Thiry, “but that has really proven to be unnecessary for a dog’s success as long as they have the right qualities.” That includes a high prey and play drive, an ability to use their nose and a desire to work. On top of that, avalanche dogs are mountain ambassadors, taking pictures with families and interacting with kids, so they also have to be sociable. When selecting a puppy, most handlers will use some variation of the Volhard Puppy Aptitude Test to assess their overall temperament and fit for life as an avy dog.

“Size is another consideration,” says Allen. “We have to be able to pick a dog up and carry them if conditions call for it, plus, there are sometimes weight restrictions for flying on a helicopter.” Generally, most avy dogs are between 40 and 70 pounds and have coats well-suited to their snowy work environment. Current popular breeds include German Shepherds, Labrador Retrievers, Golden Retrievers, Doodles, Border Collies, Duck Tolling Retrievers and Belgian Malinois. 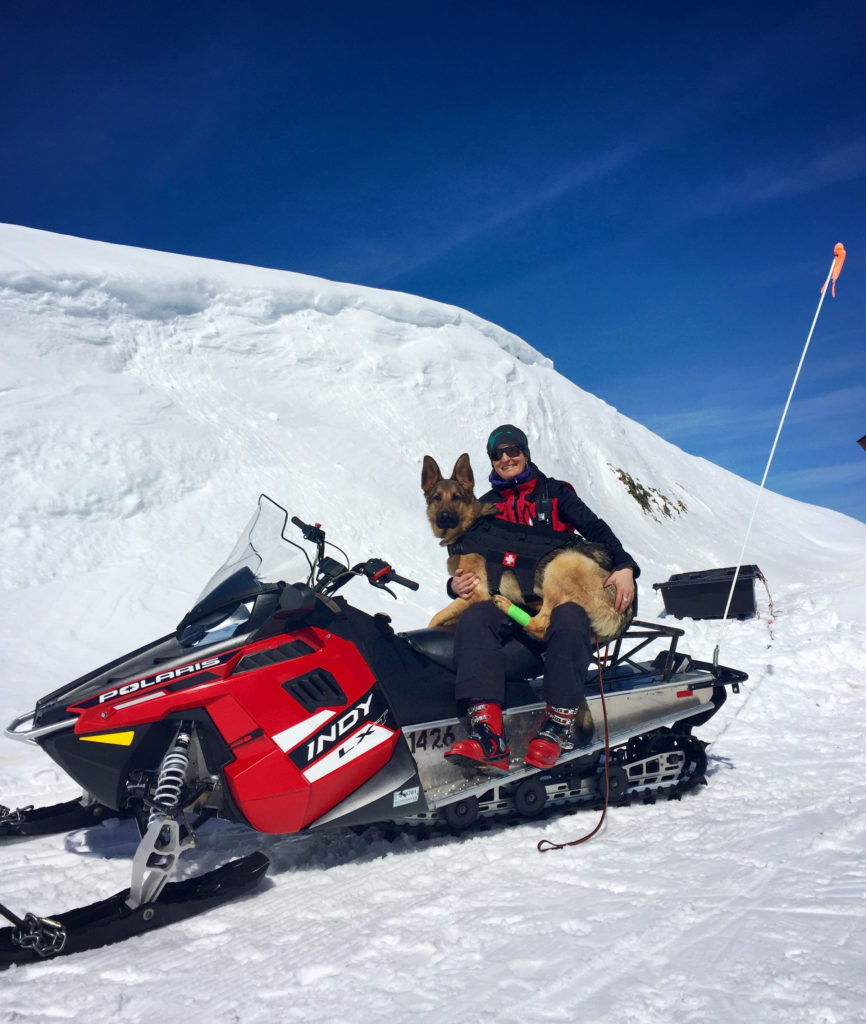 #2 What type of training is required?

Training is always ongoing, for both the dog and the handler. “Puppies start out with basic obedience training and hide and seek games,” says Allen, “then work up to avalanche-specific skills like riding a chairlift, being belayed off of a chairlift, running between skis, riding a snowmobile and helicopter, going down a snow hole and finding a person in a burial.” Like any skilled profession, practice is key. “We try to do at least two, 10-minute sessions of nose work every day,” says Thiry. “I think a lot of people underestimate the amount of commitment it takes to train an avy dog,” she says. “It is daily work.” Allen agrees. “One of the most important things we do as a handler is to understand our dogs, learn their language,” she says. “And that takes a lot of work, a lot of listening to your dog.”

For both Thiry and Allen, a lot of their own training is dependent on their dedication to self-driven continued education. Idaho does not have a formal avalanche dog training program, so both rely on the expertise of other, well-established organizations, reading books, shadowing experienced trainers and traveling to training events around the region. Thiry and Bergen have participated in programs hosted by the Colorado Rapid Avalanche Deployment Team (C-RAD) and the Canadian Avalanche Rescue Dog Association (CARDA) while Allen and Linus are planning to attend training in Colorado and Utah this winter as he enters his second training season. “Our local resorts also try to work together,” says Allen. “Everyone trains a bit differently, but we all rely on the expertise of one another and patrollers who have worked with programs in other states.” 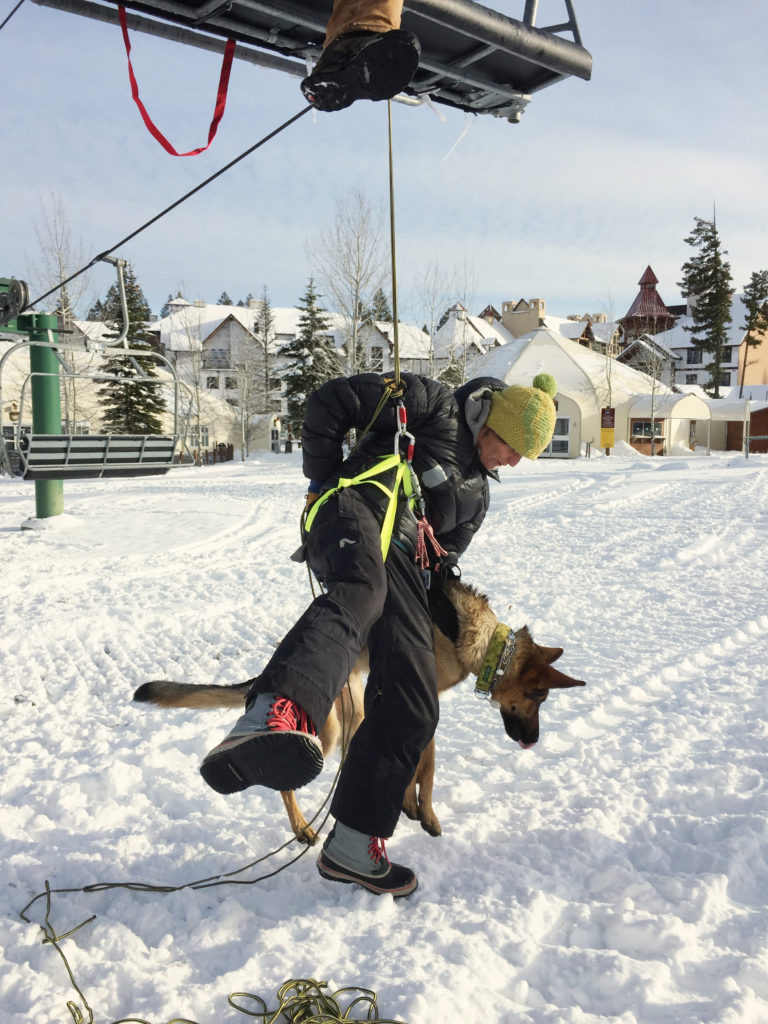 #3 How dangerous is this type of work for a dog?

“As a handler, we would never go into an area that had not been cleared,” says Allen. “Our first priority is scene safety.” Handlers must have avalanche experience to do this type of work. Thiry holds  Pro Level 1 Avalanche Certification and Allen holds a Pro Level 2 Avalanche Certification and if they are deployed, the handler and dog team would be accompanied by an Avalanche Tech who has at least that same level of certification, if not higher. “We would never give a command to search unless we know it is safe,” says Thiry. “It is always a weighed risk, we will likely risk more to save more, but we don’t send a dog in blindly, the handler is going into the same situation as the dog and safety is always a top concern.” 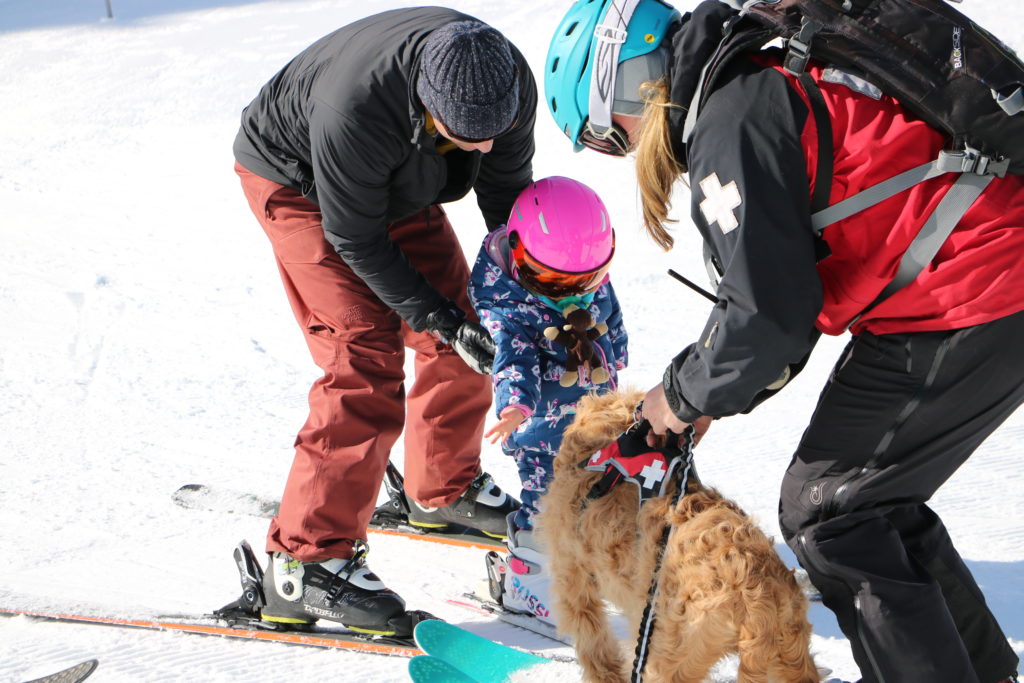 #4 How should the public approach an avy dog?

Part of the appeal of having avalanche dogs at a resort is that they are fabulous mountain ambassadors. “They really help patrollers be more approachable,” says Allen. “If we are talking to a group of kids about safety – skiing with a buddy, wearing a helmet, not stopping where you can’t be seen – a dog can be a great way to make it fun.”

But before you run up to snap a photo with an avy dog, both Thiry and Allen have the same piece of advice…always ask first. “The same is true for any dog,” says Thiry, “but especially true for working dogs.” Even though their temperament and training makes an avy dog socialized, they can also be more intense so it is important to get permission from the handler before you run up to pet an avy dog. “There are also special considerations for the environment,” says Allen. Ski edges can cut a dog’s leg quite easily, so she typically asks people to take their skis off before approaching. 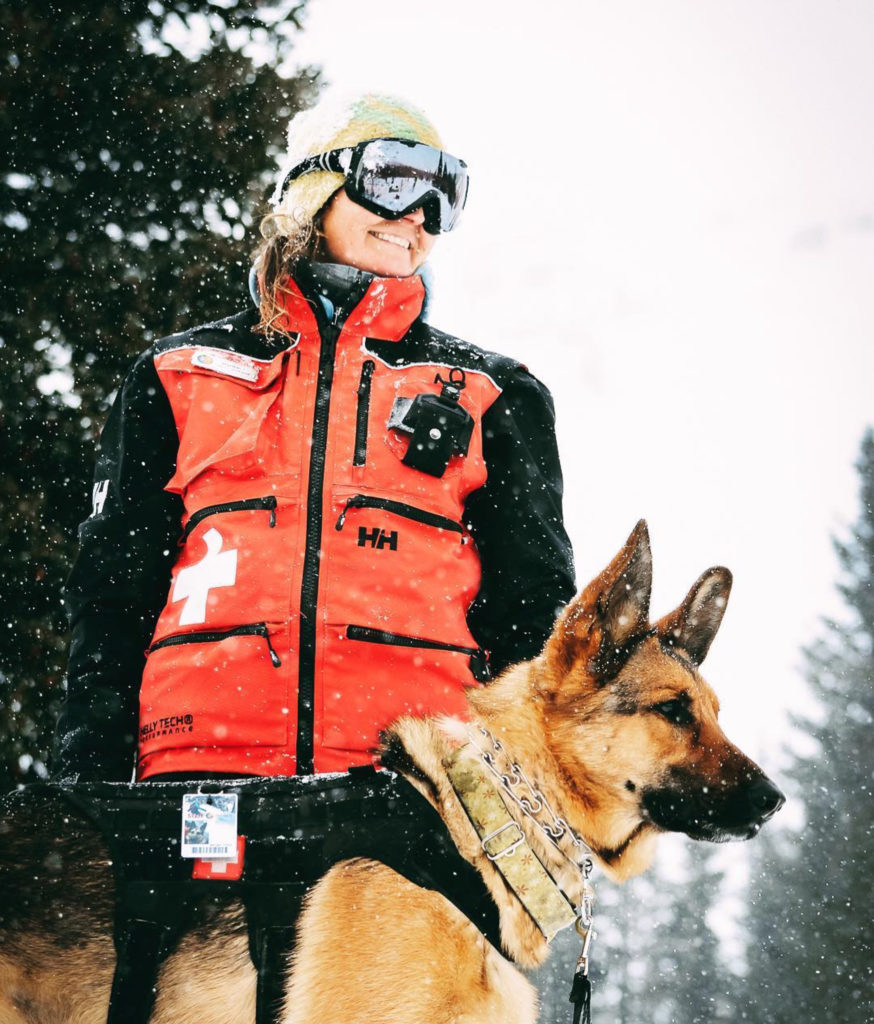 #5 What do you like most about being a handler?

For Thiry, it is a love of watching Bergen work. “I have never seen another person or another dog get as excited as him to go to work,” she says. And the way he works is amazing. “Being a Shepherd, he figures things out differently than a Lab or a Collie,” Thiry says. “I can see him work through a problem, see him get frustrated, and then get super stoked when he figures it out.” Another perk of the job? Getting to spend all day with your best four-legged buddy. Allen says that is one of her favorite parts of being a handler…“I mean, who wouldn’t want to bring their dog to work every day?”