It’s hard to miss the giant building in downtown McCall that is home to the Manchester Ice and Event Center. Built with huge timbers and paying homage to the rich history of the mill and logging industry with the architectural design, the ice rink has been cemented as a community gathering place. It is a place where families meet, kids run free with friends, and the lure of the ice inspires all ages to take a chance on skates.

While the ice rink is a very visible landmark in the community, there is a wealth of programming, maintenance, and dedication by the staff and foundation that supports it not readily seen from the exterior. We sat down with John Barth, General Manager, and Lori Benton, Director of Skate, to get the behind-the-scenes scoop on everyone’s favorite rink. 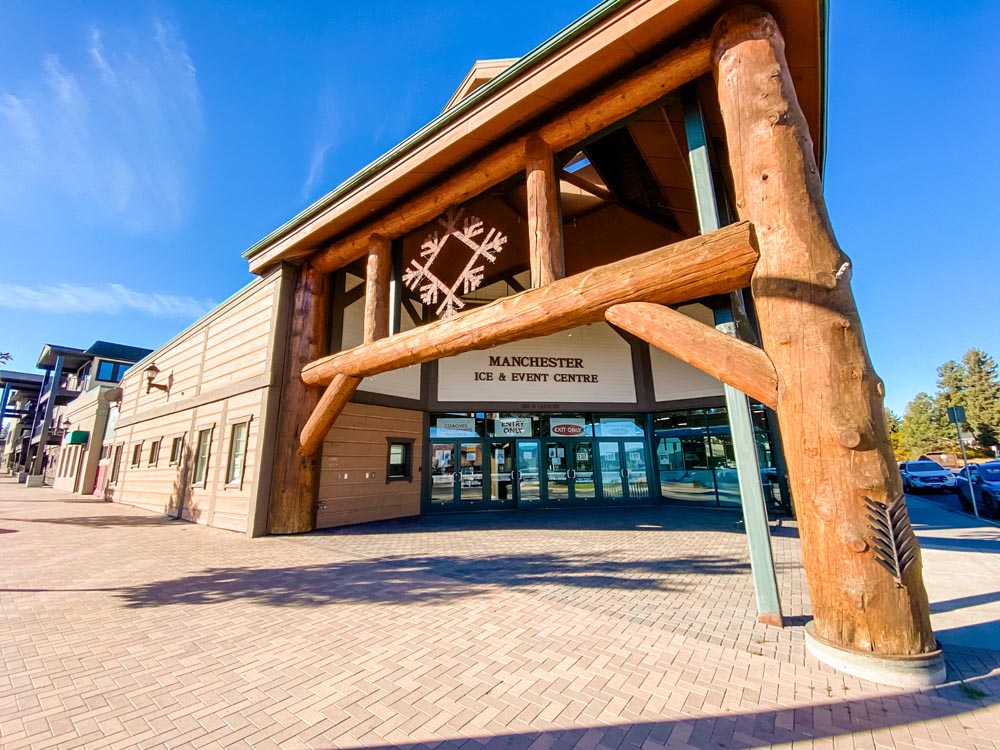 1 How did the rink get its start?

Tragedy is actually the catalyst for the community rink, says Barth. The Sabala Family formed the Richard Sabala Foundation in honor of their son who died tragically in a car accident. By honoring his memory and love for McCall, the Foundation has worked to support several projects in the area. The Ice Rink was the second project of the Foundation, following the completion of the Rich Sabala Athletic Complex at Payette Lakes High School, completed in 1996.

The land the rink sits on was purchased in 1992 with the formation of the Foundation, but it would take many more years to realize the final building. “Many people falsely assume that because the rink has the ‘Manchester’ name on it that it was just one check written and fundraising was done,” says Barth. “But that couldn’t be further from the truth. Barth says the Foundation worked tirelessly to raise the $7 million needed to build the facility. In 2003, the rink officially opened for business. 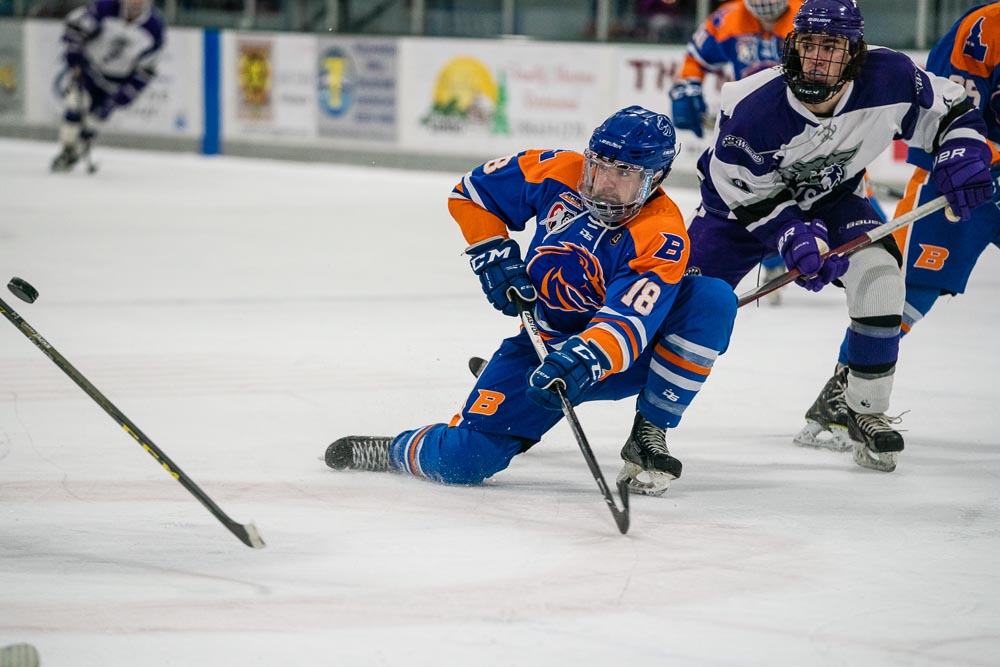 2 What programming does the rink offer?

Hockey and ice skating are staples at the rink. But just saying the rink offers “hockey and figure skating” is such a disservice. The rink starts with hockey teams for kids ages four and up while kids under four can learn to skate with private lessons. From youth leagues to adult teams, stick-n-puck sessions and weekly drop-ins, tournaments and week-long hockey camps, there really is something for everyone. On top of the local hockey leagues that run from September through April, the rink also hosts collegiate games (be sure to get your tickets to the BSU vs OSU game the first weekend of Winter Carnival) and is working to get full-contact spectator hockey back into regular rotation.

On top of hockey, the rink is a figure skating powerhouse. “One of the things that makes this rink so unique is that we are a ‘show rink,’” says Benton. Those in the figure skating program have an opportunity to showcase their talent at two annual shows, one at Christmas and one at Winter Carnival. “The Carnival show is one that just doesn’t happen anywhere else in the United States,” says Benton. “Most shows will feature one or two guest skaters where we have ten guest stars working with 40 local kids to put on an amazing production.” 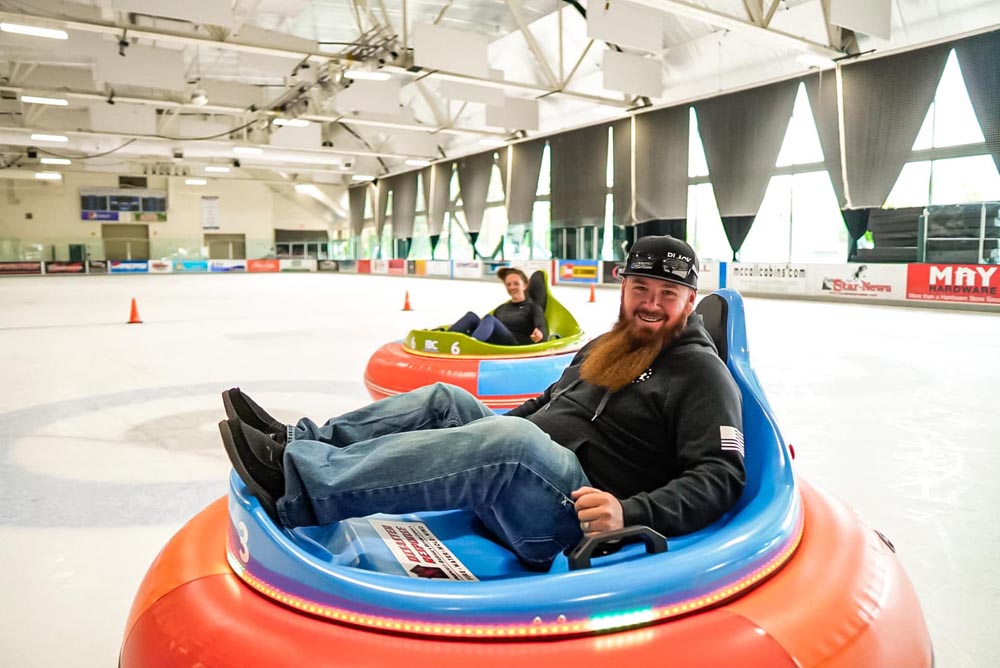 With figure skating running year-round and hockey dominating the winter months, the rink was able to bring in a new summer program to add even more entertainment for the community…ice bumper cars. The bumper car sessions run regularly each week along with Public Skate sessions for anyone wanting to drop in and take a turn on the ice to partake.

3 What sets this rink apart from others?

The dedication and participation from the community, says Barth. “Along with about 80,000 visits per year, we also have about 100 families that call the rink ‘home,’” says Barth. It is a family place where everyone can come and enjoy a few hours. “We watch families grow up here,” adds Benton. It usually starts with a little kid that wants to figure skate or play hockey and by the end, mom and dad are learning to skate and play in leagues, too. “It is inevitable that the entire family gets sucked in,” says Barth.

The rink also offers a level of competition that can be hard to come by in a small rural town. Both hockey and figure skating are feeder programs for higher level competition. From playing collegiate hockey to earning medals in US Figure Skating Testing Tracks, this hometown rink has the potential to be a launching pad for kids wanting to pursue their sports.

“One more unique aspect to the rink,” says Barth, “is the amount of dasher boards at the rink.” He says that a lot of rinks only have a few sponsors here and there, but in McCall, 66 boards surround the ice. “It is such a testament to the community support we have,” he says.

4 What does it take to keep a rink this size running?

“The maintenance on a facility like this is unbelievable,” says Barth, “and it is constant.” From ensuring the cooling systems are running smoothly to keeping the one and only Zamboni working for its six to ten rounds per day, upkeep isn’t easy. And then there is the general stuff. “People always joke with me about the glass in here,” says Barth. “They can never believe how clean it is…and that’s because we clean it every single day!” 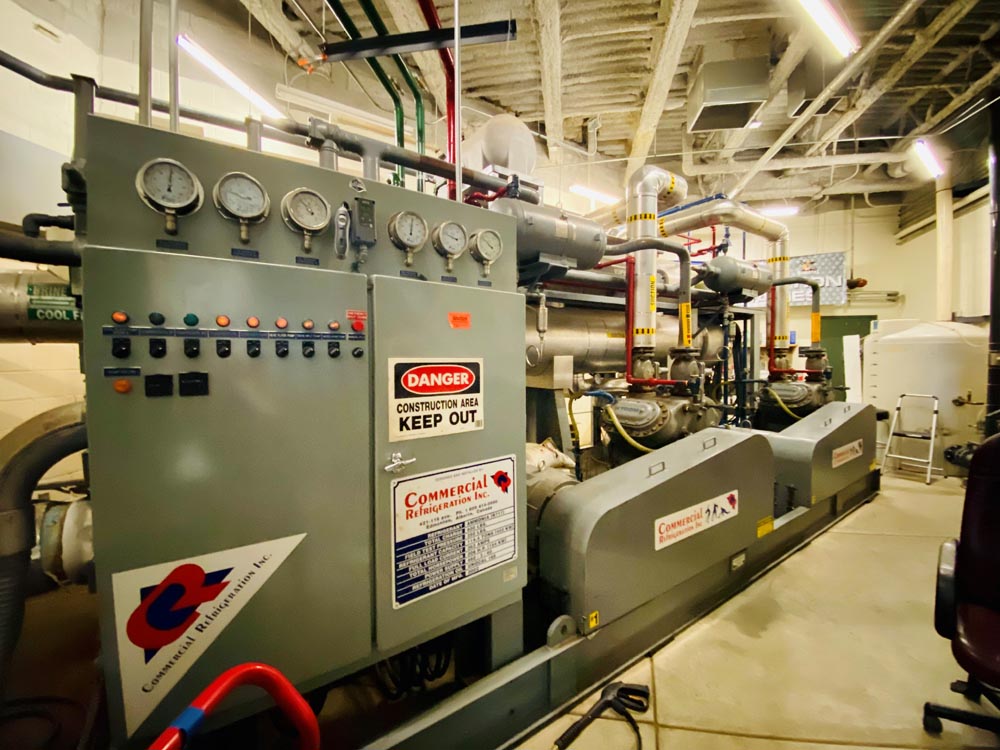 Behind the scenes, the compressor room is mission control for the rink, housing the compressor, water heater, and condenser tower. Together, these keep the ice at optimal temperature. “We like to keep the ice at 18 degrees for hockey because it resists slicing,” says Barth, “then we increase the temperature to 21 or 22 degrees for figure skating so it won’t shatter.” Aside from simply keeping the ice cold, the mechanics of the rink also work to change the temperature of the ice constantly between daily programming needs, able to drop one degree every thirty minutes.

None of the equipment is cheap to replace and the rink works diligently to repair as much as they can on site regularly. The rink operates as a non-profit with support from the Sabala Foundation. “We are so lucky,” says Barth. “Without the support of the Foundation, the rink would not be able to offer the programming we do at the rates we do.” And while the pandemic curbed the rink’s goal of becoming 100% self-sufficient using only operations revenue, they are getting closer. “Bumper cars and hockey camps in the summer have really helped us bridge that seasonal gap.”

5 What has the pandemic been like for rink operations?

“Honestly,” says Barth, “one of the biggest accomplishments in the past few years has been how we operated during the pandemic and where that put us today.” Barth says that they were one of the few rinks between Coeur d’Alene and Salt Lake City able to stay open in the summer of 2020. “Because of that we saw a lot of new participation,” he says.

“We had strict COVID protocols in place,” says Benton. And people were happy to abide by them. “People basically said ‘If you want me to stand on my head I will just so I can skate,’” recalls Benton. McCall’s rink became a sanctuary for not just the local community, but many regionally looking for a place to continue skating.

And that participation has rolled over into current operations. This past summer the rink hosted hockey camps seven out of eight weeks. Previously, the most they had hosted was three. And it doesn’t stop with camps. “We are operating every day from 6am to 10pm,” says Barth. “For a rink to be running hard that amount of time every day is a real statement about the kind of participation and support we are seeing.”

Want an easy way to get started at the rink? Sign up for a “Learn to Skate” program. These sessions are open to all ages and a great way to get familiar with the ice. For more information on winter sessions, please visit manchestericecenter.com.