Let’s have a bit of fun and celebrate a symbol of McCall…Sharlie!
Sharpen those colored pencils and grab a box of crayons and share what you think our beloved lake monster looks like. Is she bright and colorful or dark and moody? Draw your own or color in our ready-made Sharlie image.
Then post a picture to Facebook or Instagram for a chance to win six seats from our friends at Payette Pedal Party! Winner will be drawn at random from all entries on August 29th! 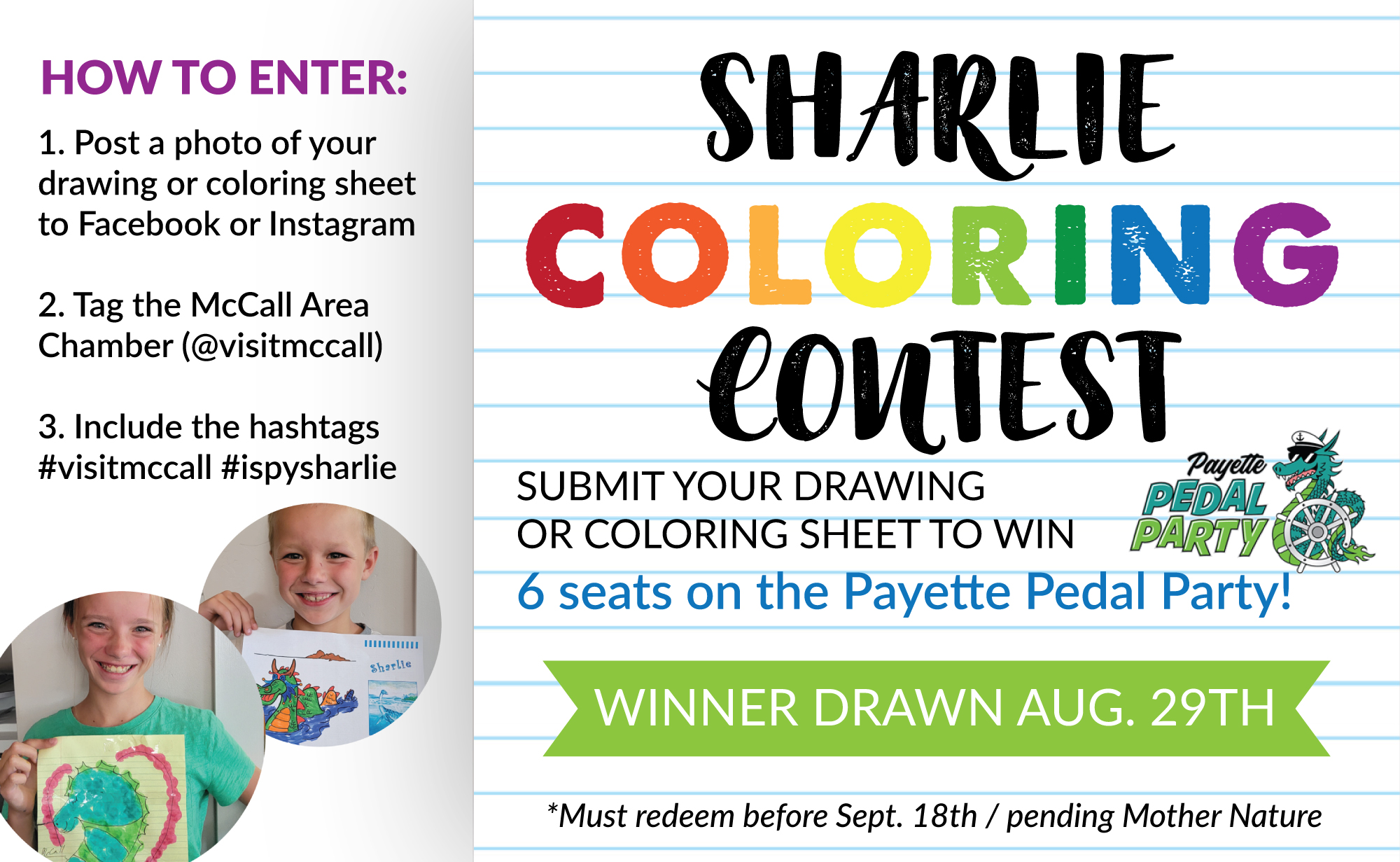 The Legend of Sharlie

Everyone loves a good legend and we have a great one right here in McCall, Idaho with “Sharlie,” our resident Lake Monster. Barbara Nokes Kwader with the Nelle Tobias Research Center in Roseberry has compiled a historic look back at the story of Sharlie.

Big Payette Lake is named after Francois Payette, a French Canadian fur trapper who roamed the central Idaho mountains during the early years of the 19th century (1800’s).

The natural lake is over 5,000 glacier-carved acres of clean, still water surrounded by towering pines and serene Douglas fir. At its deepest and darkest point, near the Northwest shore, the lake is 392 ft deep.

The Native Americans who once spent summers in Long Valley were said to fear the calm seemingly bottomless waters of the lake, telling stories of an evil spirit that lurked in its hidden depths.

The first documented sighting of something out of the ordinary was by a railroad logging crew. In 1920, while cutting railroad ties near the upper end of the lake, workers thought they saw a huge log floating in the frigid water. The log began to move forward. Then the log began to undulate. Then the ‘log’ created its own wake as it rapidly left the area.

In 1944, a group of people near the Narrows saw a creature, describing it as, “At least 35 feet long, with a dinosaur-type head, pronounced jaw, humps like a camel, and shell-like skin.” This dramatic account propelled the story into the national headlines, and serpent hunters began to frequent the tranquil area to snap a photo of the creature or even capture it outright. An article published in the nationally distributed Times Magazine in August of 1944, reported that 30 people had seen the periscope-shaped head of the creature they called “Slimy Slim” since July 2 of that year.

In 1946, twenty people in a group reported seeing the creature. Dr. G.A. Taylor, of Nampa, stated that it appeared to be 40 feet long and seemed to keep diving down into the watery depths. He also said that it left a wake like a small motor boat.

By 1954, many people had reported sightings of Slimy Slim, and residents decided their local monster needed a better name. A. Boone McCallum, editor of the Star News, held a national contest, and the winning entry was submitted by LeIsle Hennefer Tury, of Springfield Virginia. In her letter to the Star, she wrote, “Why don’t you call him Sharlie?—you know, like ‘Vas you der, Sharlie?” This was a reference to a one-liner used by Jack Pearl in a popular radio show.

Regular sightings of Sharlie have been reported over the years, but no official evidence of Sharlie’s existence has been offered up. Regardless, the residents of McCall need no proof to know she (yes, Sharlie is a she) is real. Her legend continues to grow, adding imagination and mystery to the area folklore, as an unofficial symbol of McCall.

Have you been lucky enough to see Sharlie?