Slice of Life: Behind the Plow

Home / Trip Ideas / Slice of Life: Behind the Plow

It isn’t magic. When school bus routes across the county are cleared of snow by 6am, it wasn’t elves that did the work. When the snow in downtown McCall has disappeared overnight, it wasn’t because a magician waved a wand. When you can make it to the local coffee shop for your daily dose of energy after a big storm, it wasn’t because a band of faeries lifted the snow from the roads. All this is made possible by an army of dedicated humans who give up sleep, family time and vacation days to ensure daily life in the mountains can go on despite the snow. 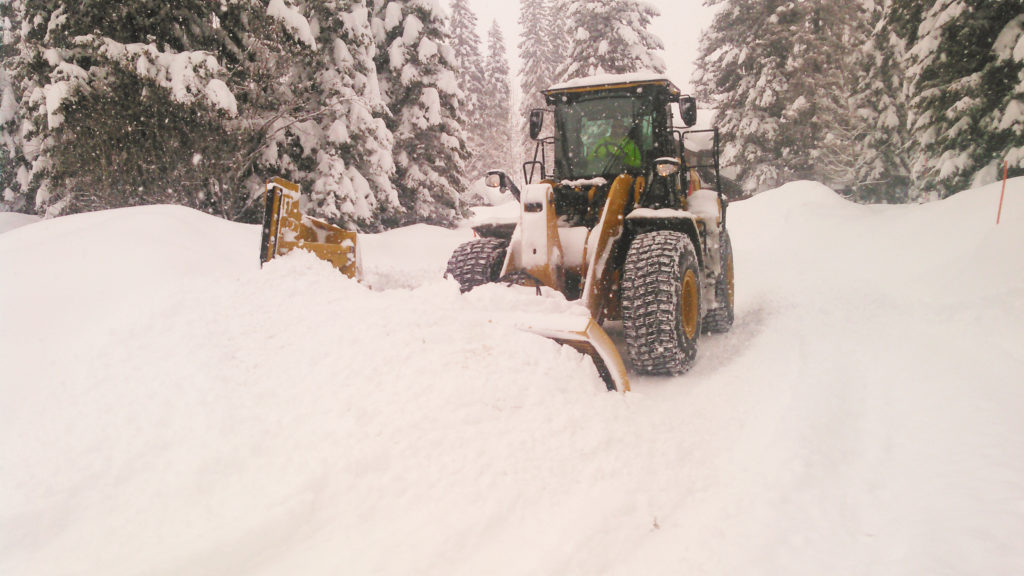 To maintain the vast network of roads in Valley County, it takes a massive coordinated effort between the county, cities and private contractors. Aside from Highway 55 which is maintained by the Idaho Transportation Department, these teams are responsible for clearing all winter-maintained roads from Smiths Ferry to McCall to Yellow Pine. Each entity has a general guideline for snowfall amounts that trigger crews to head out, generally between three to four inches, but they also look at the type of snow falling. “It really depends on the type of snow and the road,” says Jeff McFadden, Valley County Road Department Superintendent. “Six inches of fluffy snow on a side road may accumulate before a plow comes through, but an inch of heavy, wet snow on a road like Farm to Market can become a real safety concern.”

In the winter months, snow removal is a full-time job and for a plow driver, that means a lot of sleepless nights. “A typical winter day starts at midnight,” says McFadden. “We wake up, and look out of the window.” If it is not snowing, they go back to bed and wake up again every hour to check the weather. If snow is falling, they head to work. For most crews, the work day starts at 1am. “When three or four inches fall, most of our routes take eight hours,” says Chris Malvich, City of McCall Street Superintendent. “But that same route can take upwards of 16 hours if eight or ten inches fall.” So crews like to get an early start. When the weather won’t let up, road crews will take a break in the evening between 6pm and midnight then head back out for another early morning. 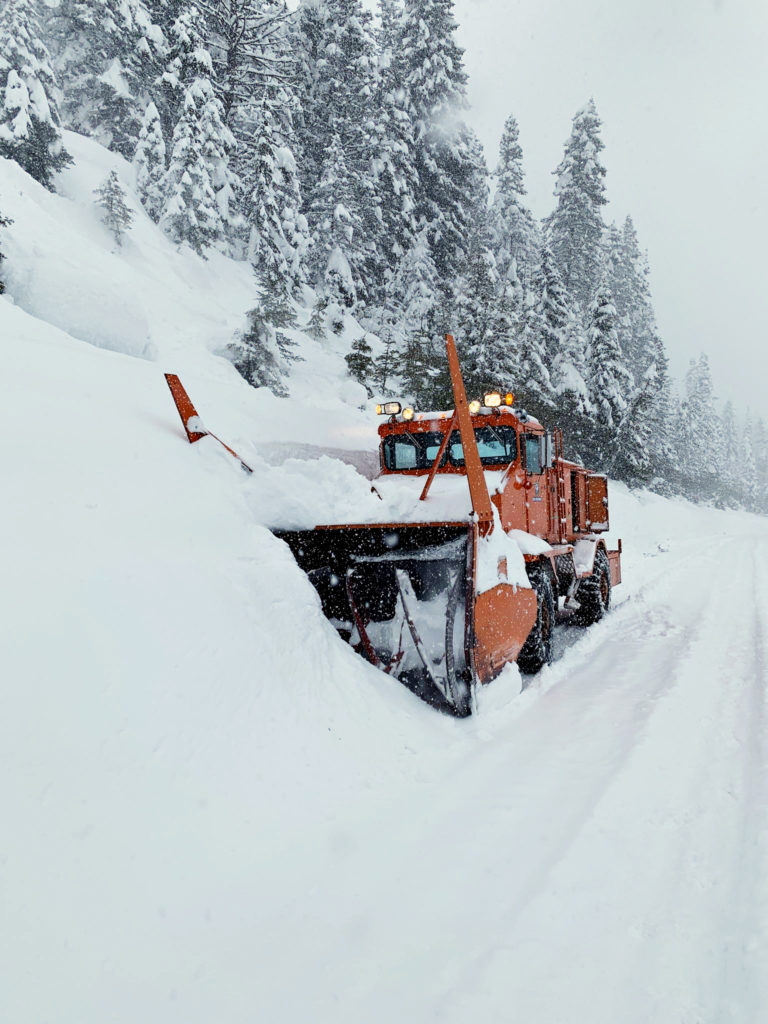 One of the reasons snow removal crews start so early is because there are fewer obstacles to contend with – like traffic and pedestrians – and visibility is better. “We are backing huge pieces of equipment out onto the highway,” says McFadden. “Each intersection takes three or four passes and that is a lot of time in the roadway. At night, we can see headlights coming.” On top of that, crews are working under deadlines. For the county and the cities, school bus routes are a top priority. “We have some bus routes that start running at 6am,” says McFadden, “so we have to get roads cleared in time.” For private contractors like Luke Crawford of Crawford Landscape, many of their business clients require snow removal to be complete by 5am so customers can access the business location. “It is actually really nice to be out in the middle of the night by yourself watching the snow come down, listening to your tunes,” says Crawford. “I enjoy it.”

Aside from the long days and early mornings, driving a plow or loader takes a lot of skill. “We have a hard time hiring people,” says Malvich. Crew members have to have experience driving heavy equipment, but experience isn’t always enough. “I have hired a couple million-mile truck drivers who spent a few days behind a plow and quit,” says McFadden. “They told us we were nuts.” That’s because there is a steep learning curve that can only be navigated with time behind a snow plow, learning the unique nuances of the job. Plow blades are angled at 30 degrees so a plow is always pulling to the left. To break through the combination of snow, drifts, ice chunks and, sometimes, hard, frozen snow that has been shoveled into the roadway from a residence, drivers have to maintain a certain speed. But hitting that debris at 30 miles an hour can cause a plow to jump off of the ground or into the middle of a roadway, so drivers always have to be alert and aware. On top of all that is the issue of visibility. “I have been plowing a road with six foot berms on either side and you can barely see the telephone poles,” says McFadden. But drivers get it done, experimenting with yellow and purple lenses, using their spotlights as a guide along a road’s edge or using reflective road markers tied to willow branches to mark a roadway and, perhaps most importantly, knowing their routes like the back of their hands. 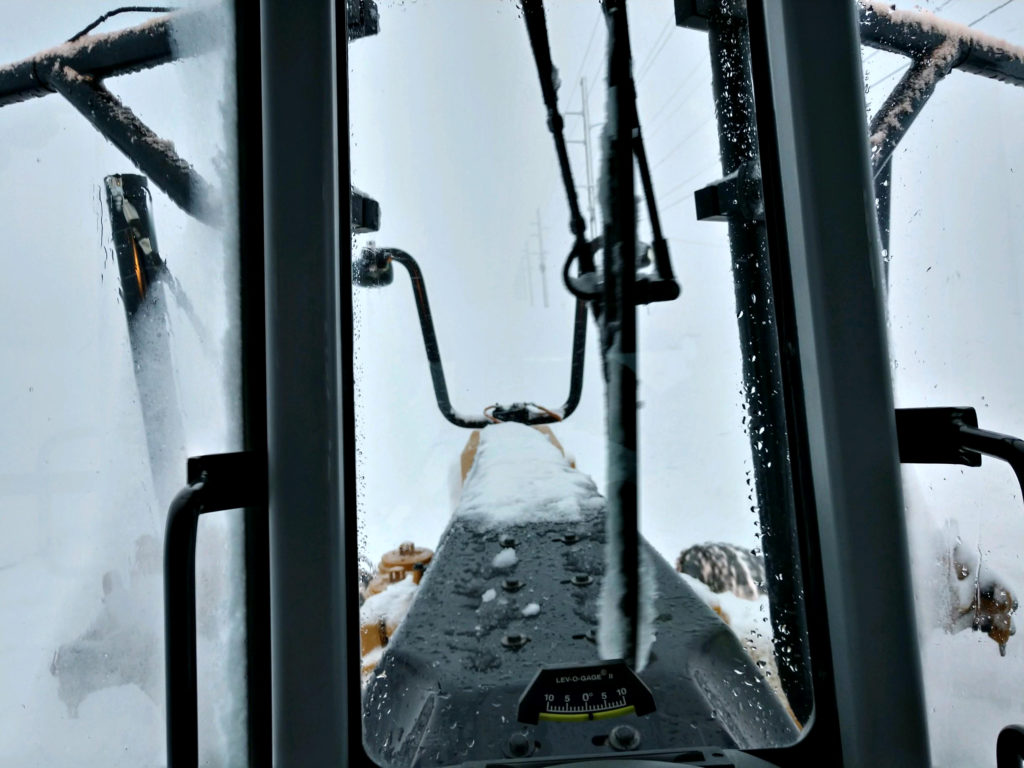 Following a winter storm, crews don’t get a day off. “We don’t take vacation from November to March,” says Malvich. The initial snow removal is only part of the job. Once roadways have been opened, the cleanup begins. “It usually takes several days to clean up a route,” says McFadden. That includes widening roads, cutting snowfloor and salting and sanding. “We are also cleaning up to make sure melted snow after a storm doesn’t linger to freeze and create more problems down the road,” says Crawford.

On top of the sixteen hour days and specialized skills this job requires, there are also other challenges. There tend to be several public misconceptions about snow removal operations and techniques. For Valley County, one of the biggest challenges is long plow routes. “Once we start a route,” says McFadden, “we can’t go back to plow the same section of road twice or we would never get through the entire route.” The only exception to this is the school bus routes. During ongoing storms, crews will plow for school in the morning then re-plow the route to ensure kids can get safely home from school. But for most homeowners, that usually means a plow will only go by once in a 24 hour period, even if the snow continues to fall.

In the City of McCall, berms and snow gate operation garner a lot of attention. A snow gate is used in residential areas to limit the amount of snow pushed in front of driveways. After they finish with the downtown core, drivers will swap out their buckets for plows and snow gates. As the plow moves down the road, a three-foot snow gate is lowered along the length of a driveway then lifted once past a residential entrance. “Gates are only good to hold snow for about 20 feet,” says Malvich. “After that, snow starts to boil over.” While snow gates can be an effective tool, during larger storms where snow accumulates in greater amounts, a gate’s effectiveness can decrease. That said, however, the City still utilizes the gates as much as possible. “Even if a snow gate doesn’t entirely eliminate a berm in front of a driveway,” says Malvich, “the berms are much smaller, usually six inches to a foot tall, rather than leaving three or four feet of snow behind.” 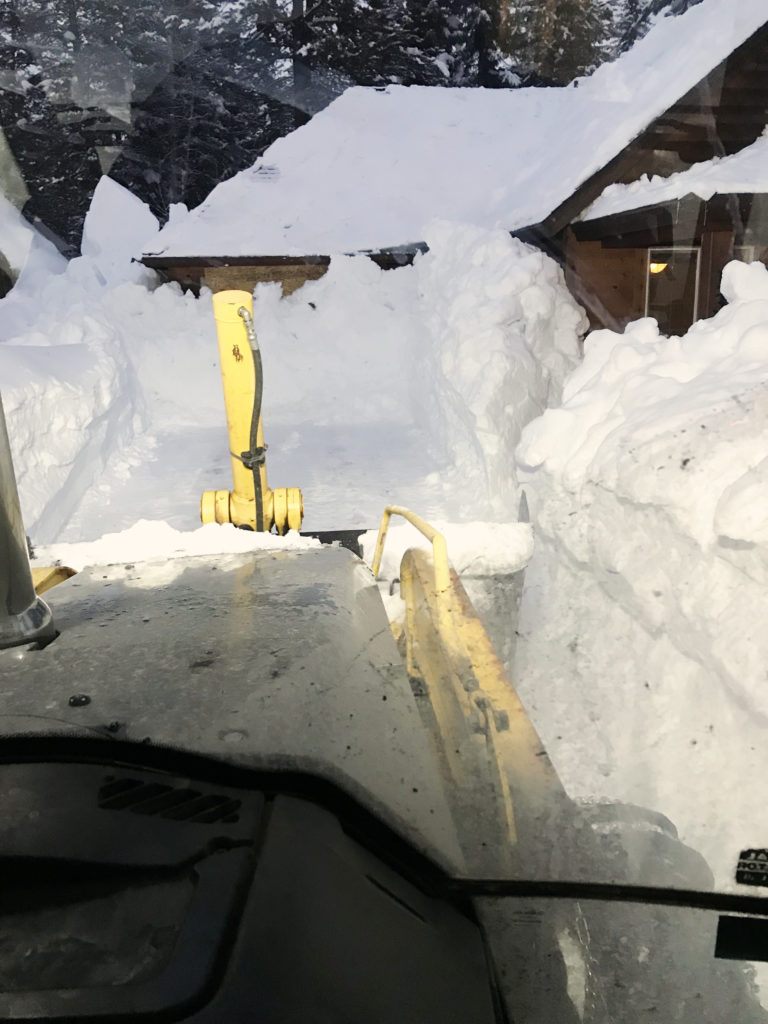 Another challenge specific to municipalities is the need to completely remove snow from downtown streets by trucking it away. In the downtown McCall core, from Colorado Street to Albertsons, snow is scraped from roads and sidewalks with loaders and hauled to snow storage areas. This creates two challenges: first, an increase in the amount of time it takes to clear the area and second, snow storage shortages. For private contractors like Crawford Landscape, snow storage is always a concern. “Each of our clients will designate an area we can use for storage,” says Crawford. “But at the end of a season, or with continuous storms like we received in February of 2019, that storage space can get full.” If that happens, snow would have to be loaded and trucked to a private holding area off-site, adding both time and expense.

With the immense amount of time, energy and challenge that goes into snow removal, crews become family. “Everybody stays until the last person finishes the last route,” says Malvich. “Everybody helps.” That mantra carries over into all parts of the community. In 2019, Cascade received four feet of snow and McCall received five feet of snow in 27 days. County routes were taking so long to plow that equipment would run out of gas. “Our mechanics were running fuel out to stranded plow drivers,” says McFadden. “It was all hands on deck.”

For the public, there are several ways to support the snow removal effort. First, don’t park on roadways. “We don’t have a no-parking rule to be mean,” says Malvich. “We need a clear path to be able to do our job.” Second, be patient and respectful of snow removal equipment. “Our plows are 12 feet wide,” says McFadden, “when you see us coming, slow down and move over – we will do the same.”  Clearing potential obstacles is also a huge help. Digging out mailboxes and adding reflective tape make it easier for drivers avoid them. Trash cans are another factor. If possible, set cans at the edge of your driveway and out of the main roadway then move them back as soon as they have been emptied.

Above all, keep in mind that the people behind the plow are human. “After 12 or 14 hours working for the community, drivers go home to remove snow from their own driveways,” says McFadden. Berms and all.