You have probably seen Adri Shurtleff-Meckel’s art all over McCall. Her drawing style has a distinct personality that is eye-catching on the surface and rich with detail and texture the deeper you look.

But this amazing body of work Meckel creates didn’t start out on a traditional path. “I wouldn’t say that I was an artist as a kid,” says Meckel “I grew up on a farm and had free rein to do lots of creative things, but I never considered myself an artist growing up.” However, art was always something she admired, especially the artists within her own family. “I think I initially fell into art because I was influenced by my aunt who was absolutely amazing,” she says. “This all came about because I just loved someone so much and wanted to be just like her.” 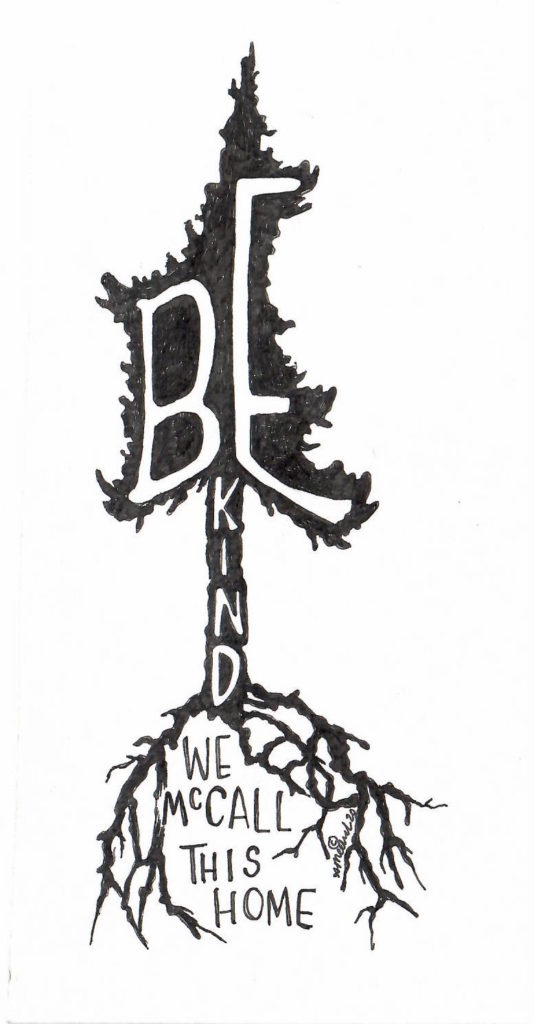 Her artistic journey began as an undergrad at the College of Southern Idaho, where she enrolled in a few art classes. There, Meckel found a wealth of support from the faculty and was initially drawn to photography and ceramics.

After two years at CSI, Meckel transferred to Boise State where her aunt was a professor. “I thought that would be it, that I would be done,” says Meckel, “but my aunt really encouraged me to continue exploring different aspects of art. That was really where the mediums that I was learning turned into a more serious voice of work.” Throughout her studies, Meckel continued to focus on photography and graduated with a Bachelor of Fine Arts as a photography major.

“I was always in the dark room,” she says. “I absolutely loved it. A dark room is so romantic and personal and had all these layers involved in creating something from start to finish.” After graduating from Boise State, Meckel and her now-husband moved to the Midwest for grad school where she earned her Master of Fine Arts from the University of Kansas. 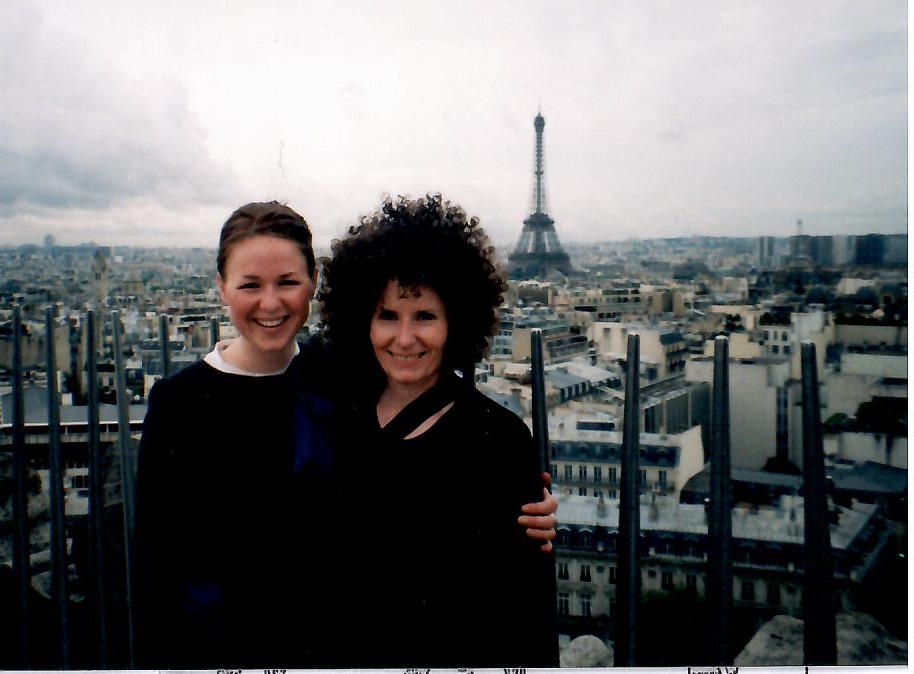 In Kansas, Meckel found that her photography transformed into an experimental art. “I was working on a lot of photography that turned into video – the work was totally spontaneous and had no object or image that lasted,” she says. “It was all very self-investigative.” As part of her graduate studies, Meckel also taught classes to undergraduates, including drawing. “It was really a serendipitous opportunity to reintroduce my drawing skills from my undergraduate work,” she says. “I was teaching drawing and I thought, ‘I need to practice more!’” Once her master’s was complete, Meckel continued to teach and continued to draw, putting in the time to hone her skills. 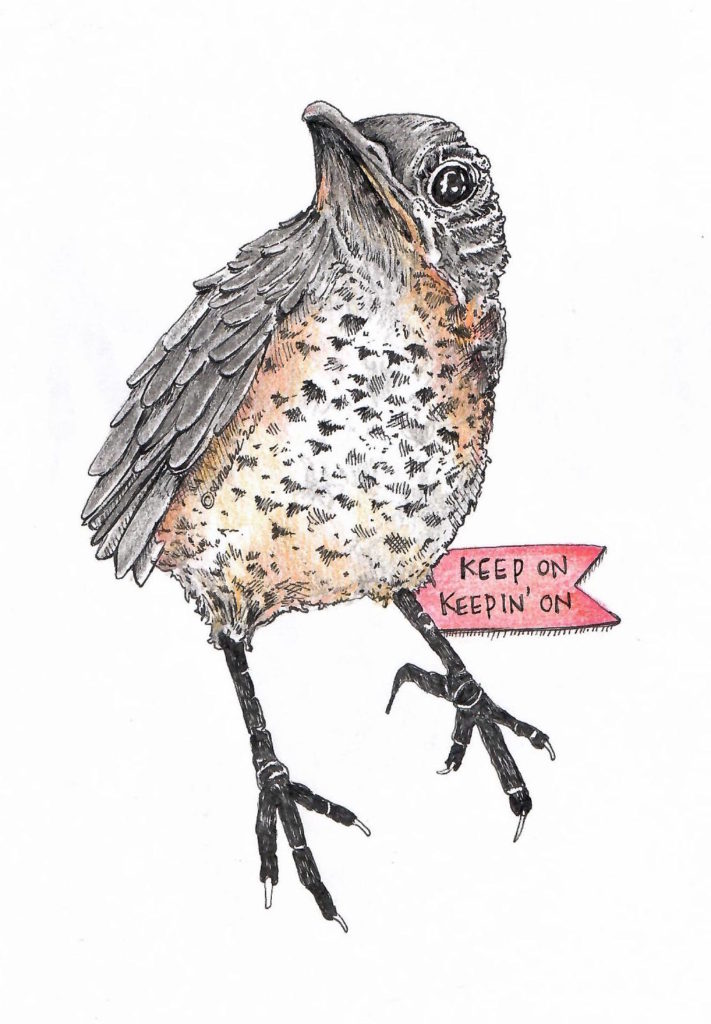 All of that practice has definitely paid off. While most would consider Meckel’s skill a rare talent, she disagrees. “I don’t like the word ‘talent’ at all because it negates all of the hours people put into the work that they have done,” she says. “We can’t even fathom how much time and energy goes into perfecting an art – whether that be drawing or race car driving – and I think it is worth respecting the amount of time someone puts into whatever they want to give their time to.” For Meckel, that means time put down on paper. 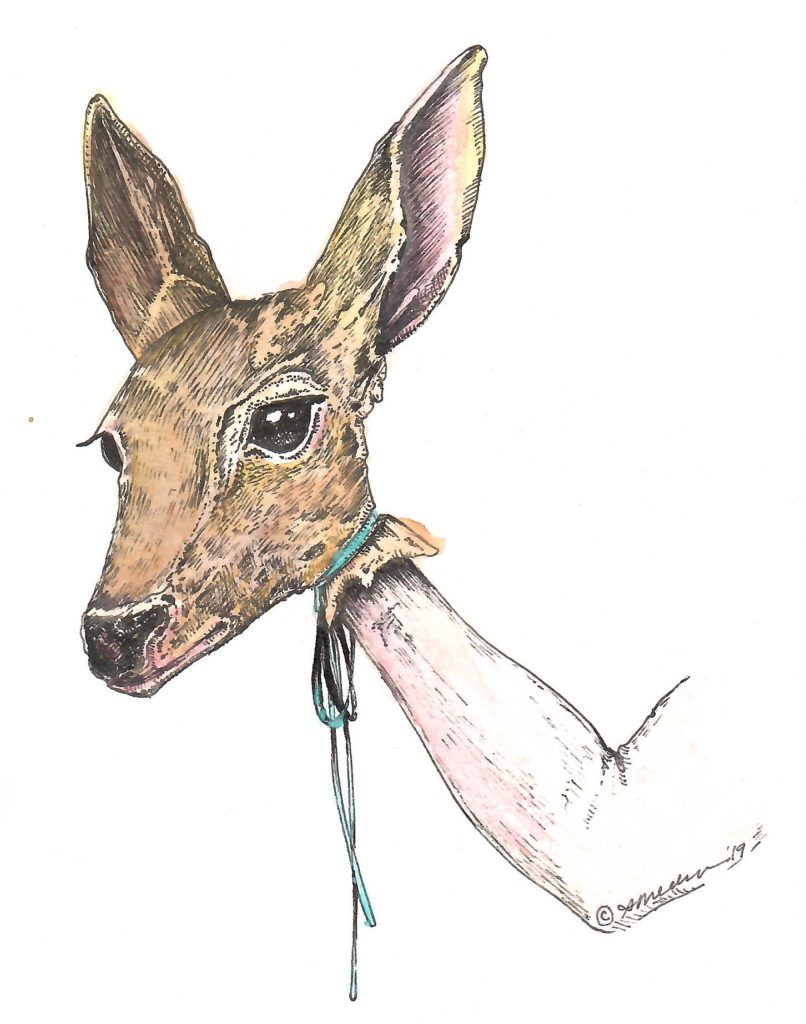 One of the things Meckel loves about drawing is its portability. “I love that I can sit down with a little lap desk and create something in 20 minutes that didn’t exist before,” she says. Drawing also opened a way for Meckel to bring her imagination to life. “One of the frustrating things about photography for me was that I couldn’t just take a picture of what I wanted to create,” she says. “Pulling things out of context was really tricky to do with traditional photography.” And Meckel has a knack for juxtaposing seemingly unrelated objects into something new.

Meckel admits her inspiration a is “mixed bag.” “I draw a lot of animals,” she says, “but usually it is plucked from its normal world and taken out of context. I like to find weird little humorous situations between things.” She also finds inspiration from the creative community in McCall. “This community is full of really interesting makers and it is just small enough that we can know one another,” she says. “Being able to bounce ideas around, even if we aren’t creating the same type of artwork, is amazing, and in my experience, I have gotten so much from other people here.” 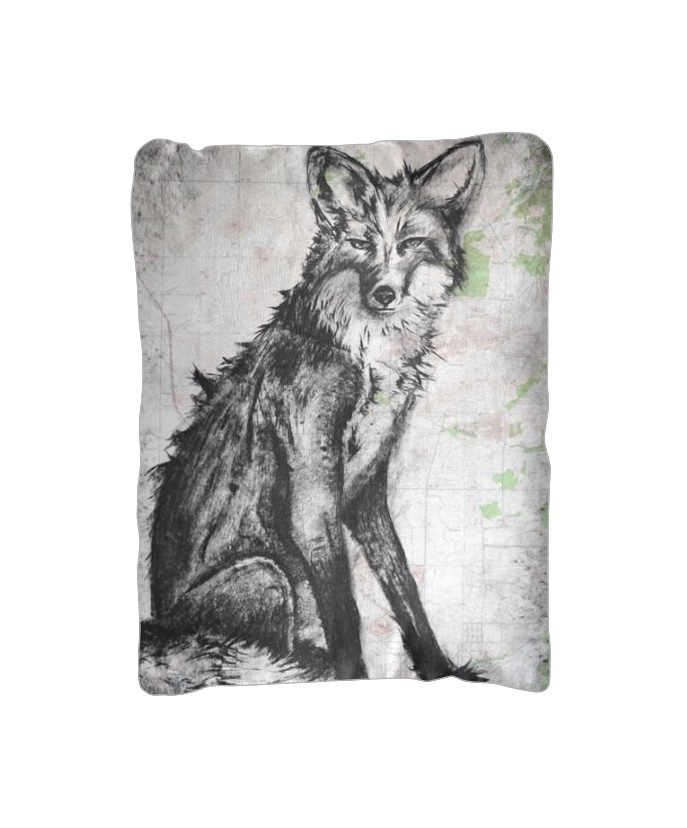 When Meckel sits down to draw, she says she is not concerned with the technical stuff. “I loved the technical side of things with photography, but when I draw, I am not following a guide,” she says. “There isn’t a ‘right’ or ‘wrong.’” One of the aspects of Meckel’s artwork that stands out is the detail and texture. “Sometimes I just get lost in the texture,” she says. “I will just start making hatch marks and then a new shape will come out of that and all of a sudden there is so much going on inside these shapes which I find really cool.” 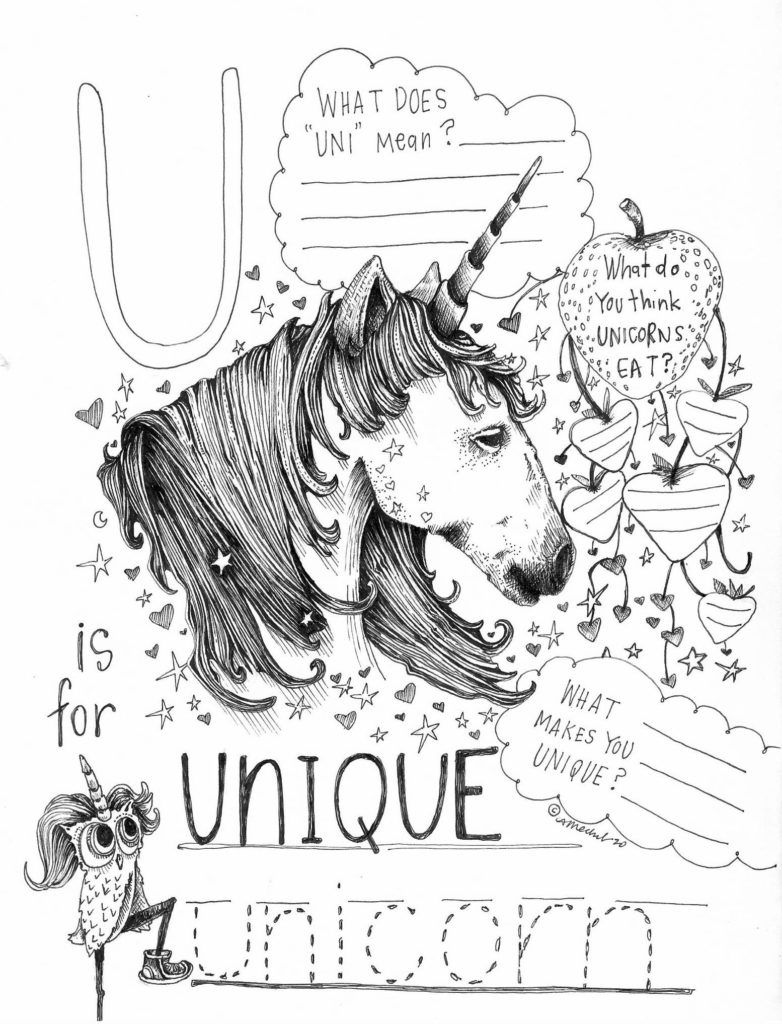 Meckel’s work covers a broad spectrum and you can find a lot of her pieces scattered around McCall in unexpected places. She is the creative behind the mural that graces the side of My Father’s Place, small items like stationary and cash cards for sale at places like Mountain Java and Ruby’s Kitchen, a sly fox printed on a throw pillow and an amazing collection of alphabet worksheets for kids (or adults!). She has also worked on commissioned pieces for clients wanting something particular. “It is fun to make people delighted,” says Meckel. “To see images out there making a difference is more important to me than having my work in some big art gallery…that is not the road of art I chose.” 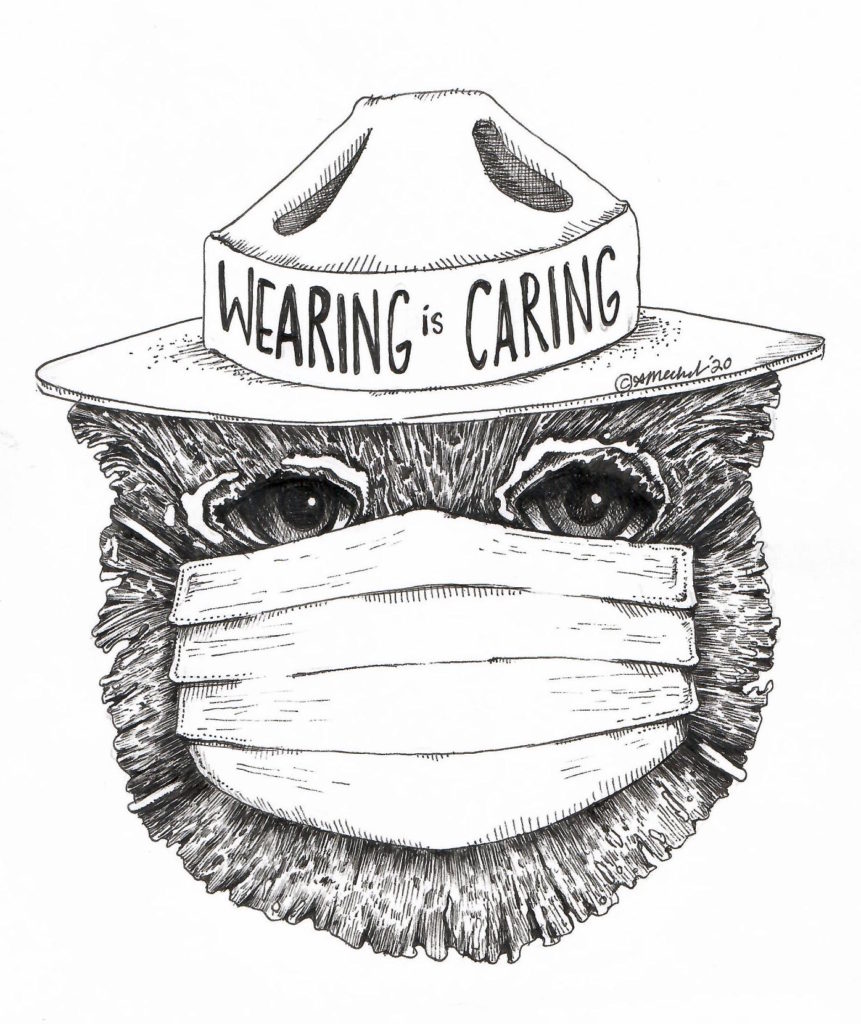 One thing that is always interesting to Meckel is the popularity of one piece over another and how other people connect with her pieces. “My favorite drawings are the ones that I just sit down to start drawing and they accidentally fall out,” she says. “They are probably the drawings that most people wouldn’t be interested in, but they are my favorite because they were a surprise to me.”

Interested in purchasing a piece? See her latest creations on Instagram or for email Adri Shurtleff-Meckel directly at adrimeckel@gmail.com.